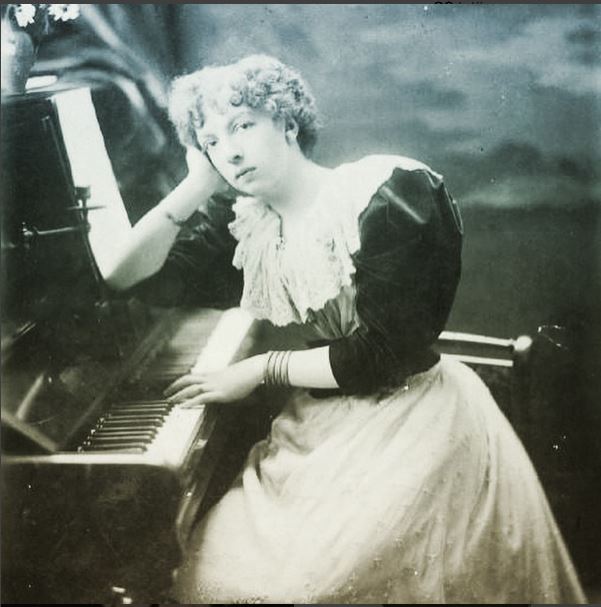 Cécile Chaminade (1857-1944) French composer and pianist and immensely popular during her lifetime.  Today mostly known and loved by flutists for her amazing Flute concertino op. 107 (1902) which is undoubtedly a staple piece in the flute repertoire.

Her over 400 compositions won her many awards and medals, most notably the Legion d’Honneur in 1913 as the first ever woman composer. Her early opus numbers show an ambition to write for the big stages e.g. the ballet symphonique Callirhoë op. 37 (1888), the opera Les Sévillanes (1882), the symphony for orchestra and choir Les Amazones op. 26 (1884) and her Suite d’orchestre op. 20 (1881). However, following her father’s death she was forced to provide for herself and began concentrating on the kind of music that was all the rage at the time (and also made her quite a rich woman eventually): salon music. The sheer number of “lovely pieces” to crown every piano in every wealthy home she produced is astonishing, and it is also this music that dominates the picture we have of her as a composer today.

Chaminade grew up in a musical family and started studying piano for her mother at the age of six, and not long thereafter she composed her first piece. When she was 10 years old, she started taking private lessons for the teachers of the conservatoire. In 1877 she made her recital debut and the following year she made her first recital featuring only her own works. The reviews were excellent and her career and esteem as both pianist and composer started here. Frequent tours on the continent followed, and from 1892 onwards she was regularly invited to England to give concerts – most notably for Queen Victoria who awarded her the Jubilee Medal. In 1908 she played two recitals at Carnegie Hall in New York and president Roosevelt invited her to play at the White House (to name two prestigious venues out of her many concerts in the USA).  She was so popular that there were over a hundred Chaminade-clubs, mainly in the USA and in England, gathering local musicians to play the latest of her published music.

In the 1920s her poor heath prevented her from touring so extensively as she had done before, and she also stopped composing. Slowly but surely, she was forgotten about. With the popularity of modernist music she was increasingly viewed at as something from the old times. With the comings and goings of the two world wars, the salon as the main musical gathering venue lost in popularity, and so did the part of Chaminade’s music that had given her world fame.

I recommend you to listen to this podcast about Chaminade by WQXR, featuring among many interesting things a recording of her playing her own music!

Here is a list of her compositions, and as far as sheet music go they’re everywhere so I will not list all of the sources here.